Myths played a very important role in Ancient Greece. These legends, and their inherent truths, are still relevant; inspiring many writers, philosophers, visual artists and composers. Many of the questions people asked themselves in ancient times, also go unanswered today.

When Joana Mallwitz asked me to write a new piece for a concert programme with Benjamin Britten’s War Requiem, I felt strongly drawn to the idea of fate. That this requiem was composed for the victims of the Second World War made me wonder why human beings still fight. Are wars part of our destiny? Are they avoidable? Can we change our lives, and those of the people around us, by means of our own decisions and conscious actions – or are we puppets of fate? Can we alter social and political situations? Do we decide our own destiny, or is everything preordained?

Greek mythology has three goddesses of fate (the Morai/Fates): Atropos, Láchesis and Klothó, who decide over humanity’s past, present and future. When the Fates, via Zeus, set Androméda’s fate, do Perseus and Androméda escape it through what they did? Androméda, although doomed to die, was saved by Perseus, freed, and long lived happily ever after with him. Is the myth perhaps about the experience of a decision in general, and how we summon up the necessary strength for it within ourselves, so that we can take more conscious responsibility?

Perseus and Androméda find each other despite dire preconditions. Did Perseus triumph over fate himself, or was it fate that brought him to Androméda? My answer to the question of destiny is really transformation. If we realise that we are the masters of our fates, and that we decide every question of our lives consciously ourselves, then we have the power of transformation lies in our hands.

Thinking about fate compositionally – looking for answers in music – was a source of great inspiration for me. The four movements of the work, which are played one after the other without a break, are: ‘The Gate’, ‘The Other Side’, ‘Dance of Destiny’, and ‘Transformation’. They follow the dramatic arc of a narrative, which offers new ways of seeing things, or altered perceptions. This is in order to feel and discover something new within us.

The first movement, ‘The Gate’, begins quietly. The repetition of particular sections give a sense of ritual. It is a prologue to the powerful main theme, which follows straight after, and which reappears in various variations throughout the work. The second movement, ‘The Other Side’, is peaceful, acting as a musical bridge between the first and third movements. It is a transition, full of longing and resonance. In the third movement, ‘Dance Of Destiny’, intense, rhythmic percussive sections and melodies are repeatedly interrupted by powerful chords. This dance also evokes the battle between personal decisions, versus what seems already made to be. The powerful chords are not strong enough to disturb or destroy the melody and the rhythm. ‘Transformation’, the fourth movement, creates a calming musical atmosphere. It also invites parallels with ritual, and unfolds the space for the listener to reflect and feel.

The orchestra is very often used as a complete instrument, which produces different sound colours. The percussion, piano, harp and organ play an important, specific part together. Apart from this the orchestra is used generally in a normal way, but each instrument provides surprising sounds through particular playing techniques. These serve the entire Klangbild, and the dramaturgy.

I position the orchestra unusually in the hall. The musicians already start playing behind the stage, and continue to play as they walk to their on-stage positions. I would like to see how it feels for both musicians and audience, if we change the habitual presentation of the orchestra and conductor. Does another type of concentration arise? Is the space – with its history, present and future – also changed? Can we transform a sense of a space through music? Although the hall consists of what is commonly seen as inalterable material, will it show us a new face through the musicians’ uncommon arrival? Or will we rediscover ourselves, as we rediscover the room? Maybe it will be both, at the same time.

After the original onset of the orchestra, the work continues in the standard orchestral setting. I want chiefly to create a gate of discovery at the beginning, in order to open up the rest of the performance. 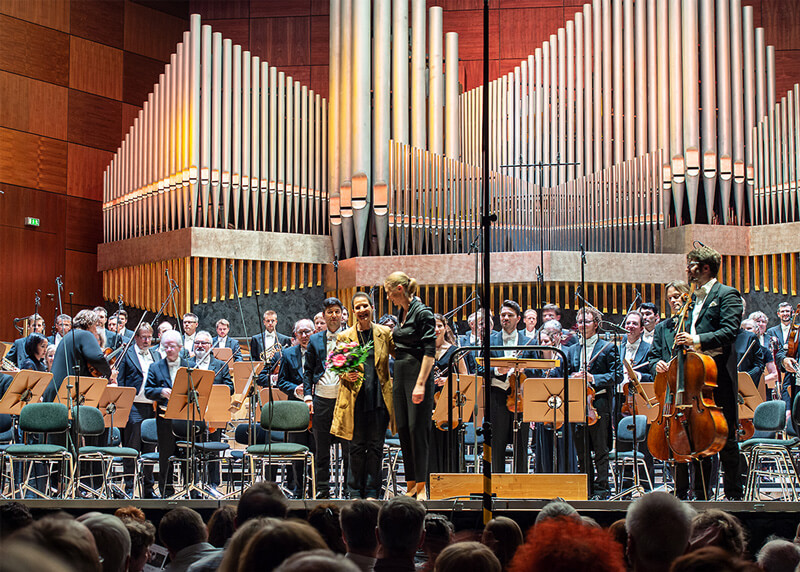