The composition Conjunctions is based on Heraclitus’ saying: “Completeness and incompleteness, convergence and divergence, concordance and discordance, and one from all, and all from one”.

Originally, the piece was composed for baritone solo. When the planned premiere was canceled due to the baritones illness, I recomposed the piece – now for a Byzantine style psalm singer, for the traditional Ottoman instrument tarhu and for improvised piano. Working on the dramaturgic composition, I was interested in the balance between defined composition material and the free space for the musicians to improvise despite the defined melodies, dramaturgic lines and certain time specifications.

Conjunctions can be performed by musicians who are familiar with improvisation and would work with me to define the process as far as possible. 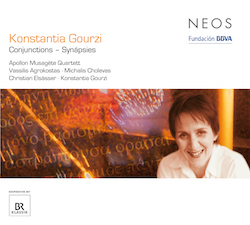