Music and Other Art Forms

Konstantia Gourzi puts on concerts, in which music interacts with sculpture, light, images and space. 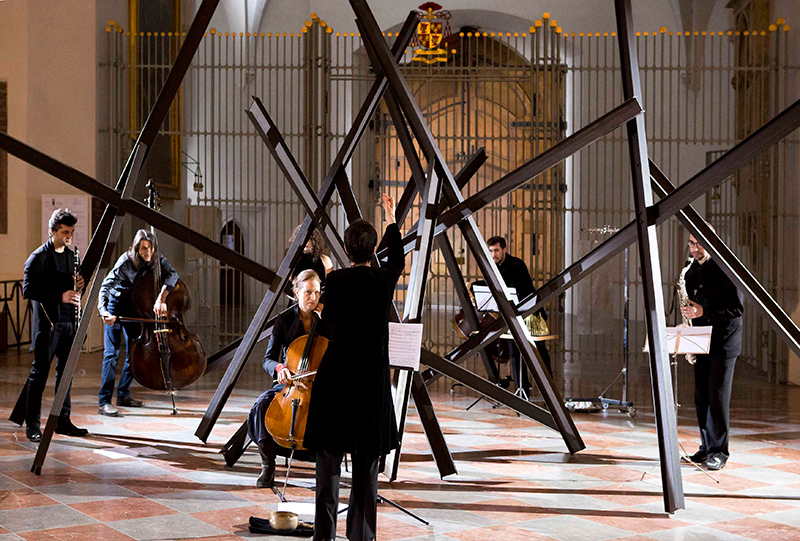 Konstantia Gourzi’s artistic work as a composer and conductor distinguishes itself through this connection with other art forms. The union of music, image and text has always been evident for her. It is not possible to separate colour, form and sound. To connect these art forms is a challenge, and a privilege.

In this way, compositions often come about in parallel with her own poems and pictures, or inspired by those of other artists. This is also how collaborations have come about with, for example, Norbert Banik, Christos Bouronikos, Yannis Gourzis, Jannis Kounellis, Vally Nomidou, Antje Tesche-Mentzen, Lila Polenaki, Alexander Polzin, Myrsini Vardopoulou, Athina Stamati and Nelly Tragousti. Gourzi has also written music for preexisting works of art, such as by Paul Klee and Adolf Wölfi. Some sculptures were the source of inspiration for Gourzi’s Angels composition series, and other compositions have inspired in their turn performances on stage, like Eva Ave, and Mykene.

Driven by the desire to present new music in a more richly multifaceted way, Gourzi has also created highly particular concert formats. Changing the space using light or sculpture also appeals to other senses during a concert.

For example, concerts with ensemble oktopus, Ensemble opus21musikplus and (in the past) with ensemble echo have all followed this concept. For each composition and concert, particular colours, pictures and sculptures are chosen, which influence the creative process from the beginning. Artistic light installations are put in place, which encapsulate the compositions in a cocoon of light, and together change the entire space.

As a consequence of these ideas, Konstantia Gourzi also brings music directly into museums, or churches. In the Guggenheim Museum in Berlin, or in the Munich Pinakothek der Moderne, she has given several concerts for special exhibitions, or for particular artworks – for example by Paul Klee, Dan Flavin or by contemporary Japanese artists.