Primary school children experience contemporary music with their hearts, hands and mind. Konstantia Gourzi, her workshop instructors and artists of the ensemble opus21musikplus provide interdisciplinary access to new music with this programme for a young audience. 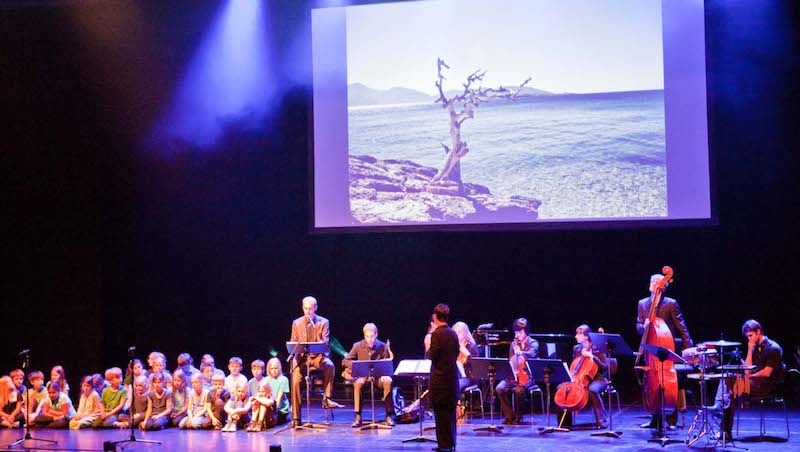 Children experience music close-up, with all their senses, in the Education Programme called “opus21musikplus live in primary schools”.

Between 2008 and 2013, Konstantia Gourzi, her workshop leaders and the artists of opus21musikplus led children towards contemporary music in a natural way. The children painted and did craft projects about the music, had instrumentalists visit their classrooms and made music together with them. Melody, rhythm, form, dynamics and musical expression were creatively worked on through form, colour and movement.

Creative activity, social behaviour, concentration and personal development were positively influenced by the stimulus of the children’s sensory, motoric, linguistic and cognitive capabilities. Their aural capacity was extended through differentiated listening to sounds, noises, dynamics and tempi. This also develops the aural receptivity of the children. The connection between contemporary music and improvisation with other art forms boosts imagination, creativity and mental flexibility.

The Education Programme lasted for one complete school year a time. Graduation from the programme was marked by a concert in the school, or in Munich’s Gasteig, in which the children appeared on-stage with musicians from opus21musikplus. Composers like Enjott Schneider, Minas Borboudakis and Masayuki Nakaji wrote new music for these concerts, and attended the world premieres. Choreographers from the Gärtnerplatz Theatre and pedagogues from the Munich Hochschule also accompanied the whole project.