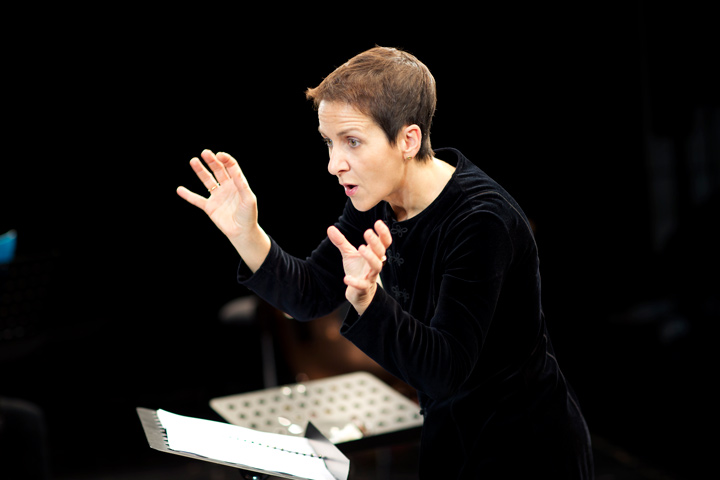 Konstantia Gourzi studied composition and conducting in Athens and Berlin. She can frequently be seen in the double role of composer, and conductor of a concert.

Her artistic and musical wish is to make connections – as a composer, between traditional and contemporary sound worlds; as a conductor with new conceptual emphases.

Always searching for new performance concepts for contemporary music, Konstantia Gourzi has initiated concert series, and has also followed the example of her mentor Claudio Abbado and founded various ensembles such as attacca berlin, ensemble echo, ensemble oktopus and opus21musikplus.

Supporting young musicians is also very important to her, and her former students can be found in all important European contemporary music ensembles.

Konstantia Gourzi’s recordings on NEOS, Sony and ECM, as composer and as a conductor, enjoy international acclaim.

Konstantia Gourzi was born in 1962 in Athens, Greece. She lives in Munich and has been Professor at the Hochschule für Musik und Theater since 2002.

Following the past successful season, also 2019/20 holds several premieres in store, i.e. for the Bamberger Symphoniker, the Felix Mendelssohn Bartholdy Hochschulwettbewerb and the Grafenegg Festival. Another highlight will be Konstantia Gourzi’s second ECM album. In Grafenegg, Konstantia Gourzi will be Composer in Residence 2020 where she will contribute to the festival as composer and conductor.