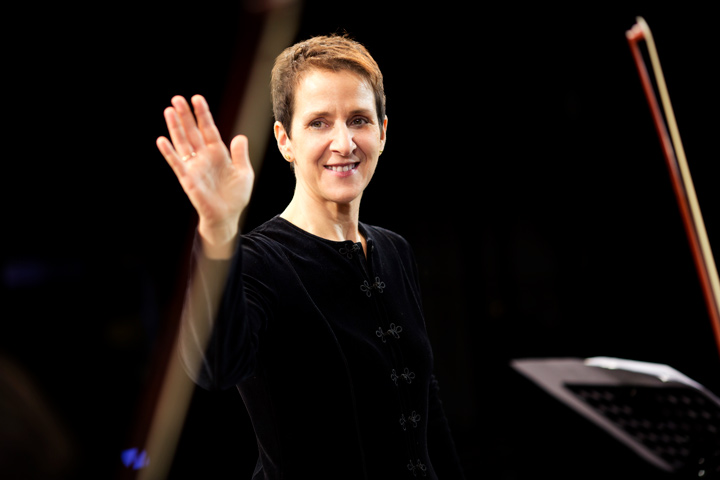 “I see composing and conducting as a whole, as an inseparable relationship,” says Konstantia Gourzi, who combines the rare roles of composer and conductor in an extraordinary way. She is influenced by the identity of different cultures and musical traditions. Konstantia Gourzi deals with current social issues and incorporates them into her musical work. Creating a connection between the arts and cultures inspires her time and again to create new performance concepts.

Konstantia Gourzi’s compositional work includes works for orchestra, chamber ensemble and solo pieces as well as works for music theater and film music. Her musical partners and collaborations include, in addition to renowned soloists and ensembles, the Lucerne Festival, the Grafenegg Festival, the Festspiele Europäische Wochen Passau, the Staatsoper Berlin, the Bayerische Staatsoper, the hr-Sinfonieorchester, the Bayerischer Rundfunk, the Ensemble Musica Nova Israel, among others, the Ensemble Neue Musik Moscow, the Athens State Orchestra, the Kasseler Musiktage, the Nuremberg Philharmonic, the Bamberg Symphony Orchestra, the Archdiocese of Munich-Freising, the Patrimonio Nacional Spain, the Felix Mendelssohn Bartholdy University Competition and the ARD Music Competition.

In Konstantia Gourzi’s music there is an inner glow and a great dramatic power that comes from stillness and centering. For her compositions she chooses timeless themes and extra-musical content, which are precisely calculated in their proportions of form and time. Her music is connected with the desire to create a sound space in which the listener has the freedom to perceive himself.

Always in search of new performance concepts for contemporary music, she initiated and directed various ensembles, first in Berlin the ensemble attacca berlin and the ensemble echo. After teaching at the Hochschule Hanns Eisler Berlin, she was appointed Professor of Ensemble Conducting New Music at the Hochschule für Musik und Theater München in 2002. There she founded the ensemble oktopus for modern music. This was followed by the network and ensemble opus21musikplus with the aim of expanding New Music across borders with other art forms and musical genres.

The promotion of young musicians is an important concern of Konstantia, which she implements and accompanies in master classes, competitions and in project work.

Radio recordings, television broadcasts and live streams document her artistic path as well as her collaboration with labels such as NEOS, NAXOS, SONY Classical and ECM.
In the spring of 2021, Konstantia Gourzi’s very positively reviewed and much acclaimed second portrait CD was released on ECM, entitled Anájikon, with Nils Mönkemeyer, William Youn, the Minguet Quartet and the Lucerne Festival Academy Orchestra under her direction.

Konstantia Gourzi was born in Athens in 1962 and studied piano, composition and conducting in her hometown and from 1988 to 1992 at the HdK (UdK) Berlin. She lives in Munich and on Aegina, Greece.